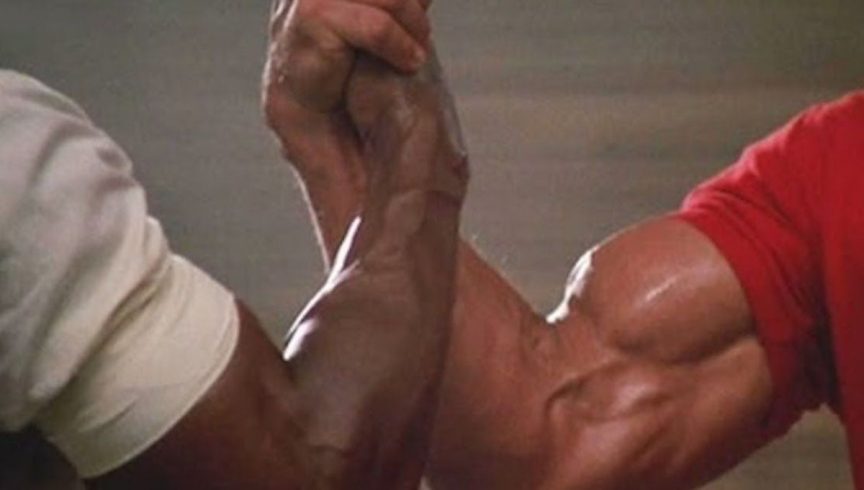 Arm wrestling is one of the most popular competitions testing the strength between two participants. To begin each person locks hands while keeping their elbows down on a firm surface, and the goal is to pin the other person’s hand down to the table. Arm wrestling dates back to the 1950’s where it began in an old saloon. There are now professional arm wrestling competitions held all over the world. However, most guys will arm wrestle recreationally when they get together with a few pals. After a few drinks people start getting all riled up, and like to challenge others to see who is the toughest guy at the bar.

However, there are many issues with arm wrestling. This fun test of strength can actually be quite dangerous. It can especially be dangerous when alcohol is involved. People often do not know one’s limits or feel pain while being intoxicated. Arm wrestling causes a lot of force and power to be transmitted through the wrist and elbow. There have been many reports of serious injuries such as fractures of the arm, and even an aneurysm resulting in death. However, those are very rare incidents. In most cases, people may just have some elbow pain or discomfort following a hard arm wrestling match. This article is going to discuss the main reasons why your elbow hurts after arm wrestling, and simple ways you can help fix this issue.

The Main Causes of Elbow Pain After Arm Wrestling

The most common cause of your elbow hurting after arm wrestling is from overdoing it causing irritation and inflammation of the elbow ligaments. The most common ligament affected is the ulnar collateral ligament on the inner side of the elbow. Arm wrestling puts a lot of torque and pressure on the inside of the elbow, which is where the ulnar collateral ligament connects. This ligament can easily be stretched and irritated while arm wrestling, and this is considered a grade 1 ligament sprain. In simple terms, it means the ligament around the elbow has been slightly stretched and is now inflamed. The stretch occurs from full exerting the tissues around the elbow especially the closer your arm gets pinned down to the table. The good news is in most cases the pain and inflammation will go away on its own in a couple days, up to a couple weeks.

Other causes of your elbow hurting after arm wrestling could be DOMS or delayed onset muscle soreness. This is actually very common after arm wrestling. Think about it, you basically just did an unaccustomed all out workout with maximal exertion. You are gonna be sore around the elbow and surrounding musculature. DOMS causes pain and stiffness a few hours after arm wrestling and can last a few days.

Other less likely causes of elbow pain after arm wrestling is tendon tendonitis or a tendon tear. You will most likely feel a tendon tear occurring and may even hear it. So these injuries are more rare, but do happen. Elbow tendonitis typically flares up here and there, and arm wrestling could cause a flare. Other less likely injuries are humeral shaft fractures. The humeral shaft is the upper arm bone, and it can be fractured while arm wrestling due to the huge amount of torque being placed on the arm.

How To Fix Elbow Pain After Arm Wrestling

If your elbow hurts after arm wrestling you are going to want to immediately rest and ice the area. You need to rest your elbow, because you do not want to cause any more damage. You can still straighten and bend your elbow, but you do not want to do any upper-body strenuous activities or exercise. Just do some simple light range of motion of the elbow to keep the area moving and prevent stiffness.

It is important to ice the area immediately after arm wrestling. This will help reduce the pain and inflammation. I recommend icing for about 15-20 minutes multiple times a day. You will notice a huge difference in the pain and swelling. Make sure to use an ice pack cover or towel between your elbow and ice. You do not want to directly put ice on your elbow due to risks of possible nerve damage. 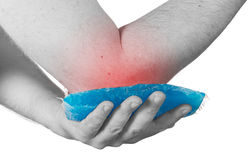 If the pain worsens or does not feel better after a few days, then I recommend going to see your Physician. In most cases, the elbow will heal on its own in a few days. However, if serious damage was done it is best to have it examined by a medical professional.

A proper warm-up is a crucial step before any physical activity, and often neglected when arm wrestling. No one ever warms-up. I know it sounds awkward, but you should be warming up at-least a few minutes before arm wrestling. Think about it, you are going to be doing a maximal physical exertion challenge which involves the wrist, elbow, and shoulder. You would not go to the gym and do a bench press one rep max without warming up. So why would you do a arm wrestling one rep max without warming up?

Avoid Overdoing it When Arm Wrestling

I recommend pushing yourself while arm wrestling, but don’t overdo it. Make sure you are picking a worthy opponent, and don’t bite off more than you can chew. If you are 5’8 and 140lbs don’t challenge a guy who is 6’3 245lbs. If you do this, you are just asking to hurt your elbow while arm wrestling. I know a few drinks can make you feel stronger than you really are, but keep it reasonable! 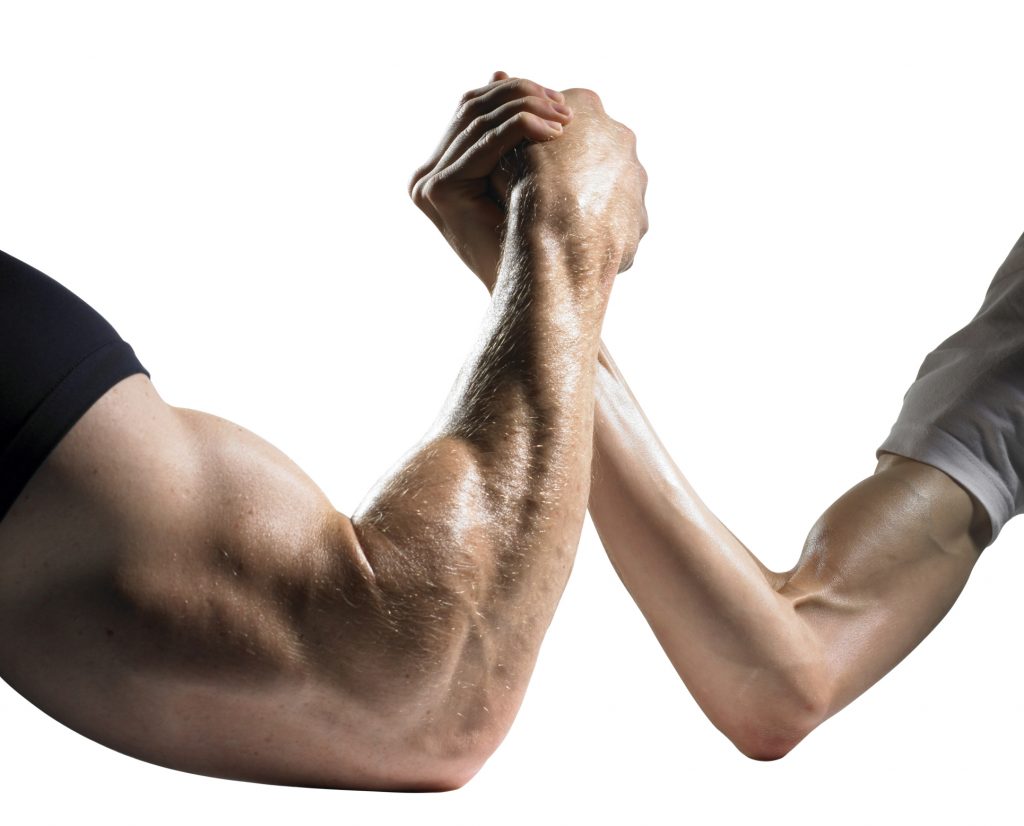 Another important thing to remember while arm wrestling is to avoid maximal exertion when you are almost pinned down to the table. For example, say your opponent is beating you and you know you are going to lose, then just stop before your hand hits the table. Most injuries occur at the very end of the motion. This is when your elbow is maximally torqued and there is a ton of pressure on the inner side of the elbow. I recommend just stopping before you get pinned down. In most cases you know you are going to win or lose after the first 1-2 seconds of arm wrestling. So, if you begin to get pinned down then just stop before the back of your hand hits the surface. This will prevent a lot of elbow injuries while arm wrestling.

Arm wrestling can be a fun competition between you and a friend, but there are some potential risks involved. The ligaments and tendons within the elbow can easily be aggravated from arm wrestling. If you experience elbow pain during or after arm wrestling make sure to rest and ice the area. Also, you can try a compression sleeve for support. If the pain worsens or does not get better within a few days, then seek medical attention.

Remember not to overdo it, and don’t apply maximum exertion when you are almost pinned down. Make sure to properly warm-up next time you challenge someone to an arm wrestling competition. Warming up is the best thing you can do to reduce the risks of hurting your elbow while arm wrestling. 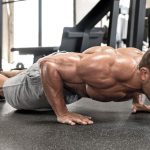 Why Does My Elbow Hurt During Push-Ups? 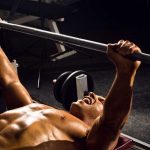 Why Does My Wrist Hurt When Bench Pressing? 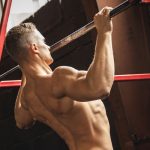 Why Does My Shoulder Hurt During Pull-Ups? 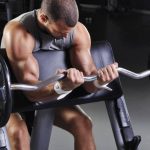 Why Does My Wrist Hurt During Bicep Curls? 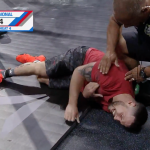 Why Do Pec Tears Happen?